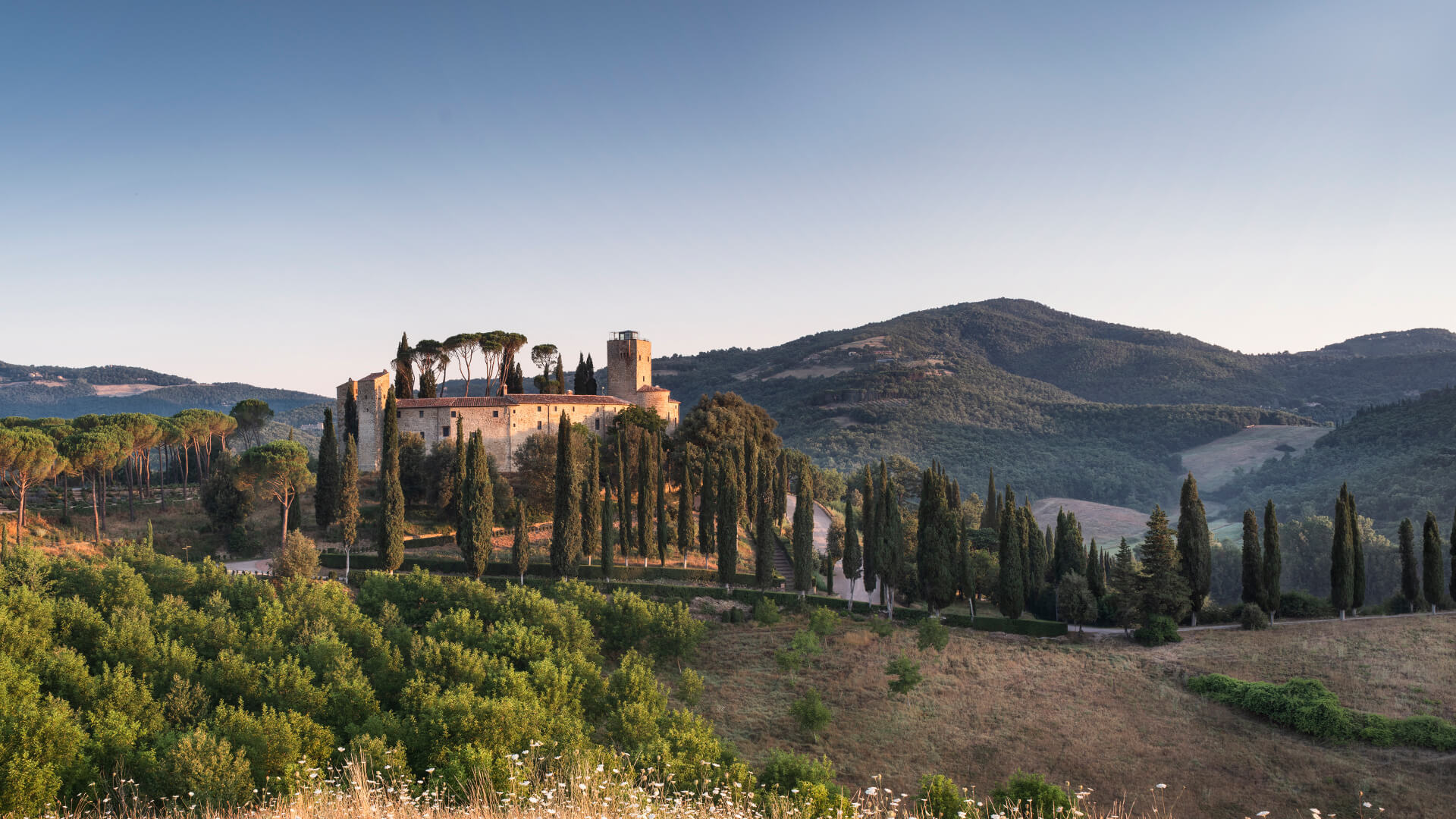 The Castello, dating back to 1050, is a historical gem brimming with interest and intrigue. Now, after years of careful restoration, it has been transformed into a singularly unique hotel filled with wit, whimsy and effortless style

Within the walls of the castle are two interlinked courtyards – one now encased in glass and starting a new life as the Palm Court. The other is a wonderful grassy lawn circled by impressive mature umbrella pines and cypresses. It is blessed with perfect acoustics and the home to concerts, recitals and pop-up events 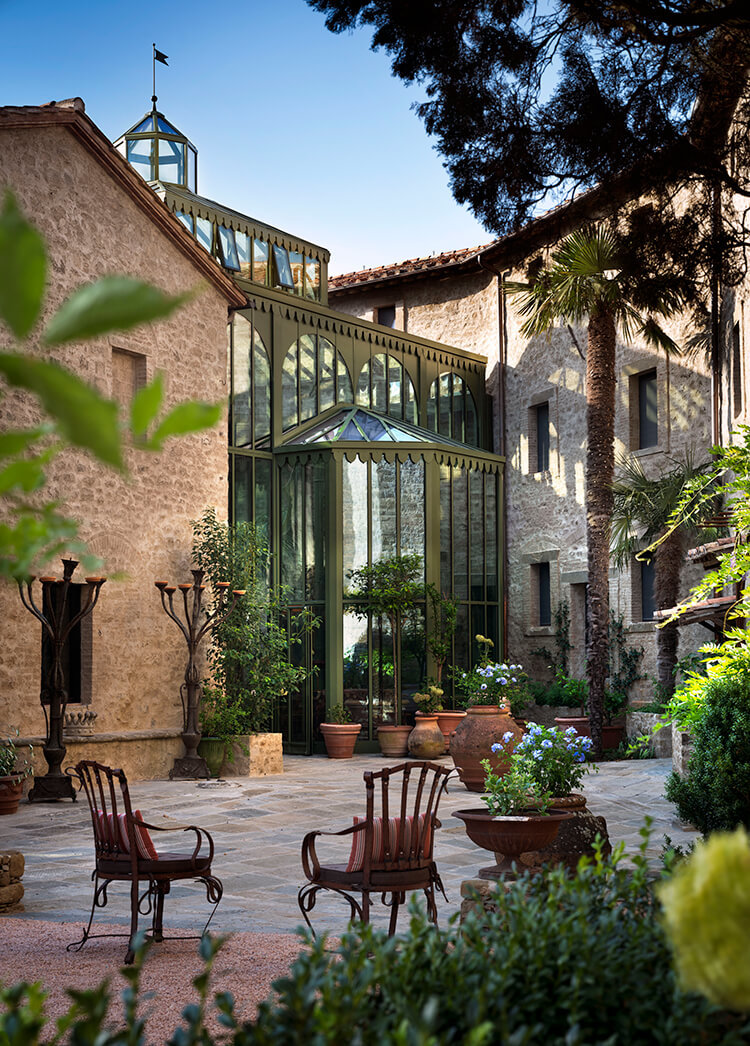 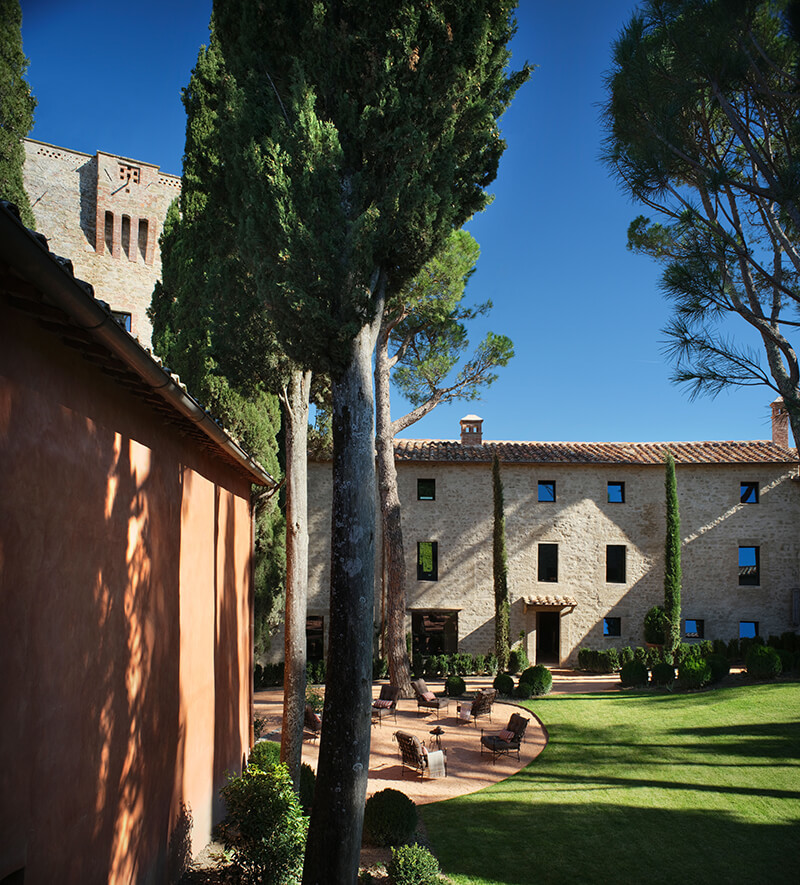 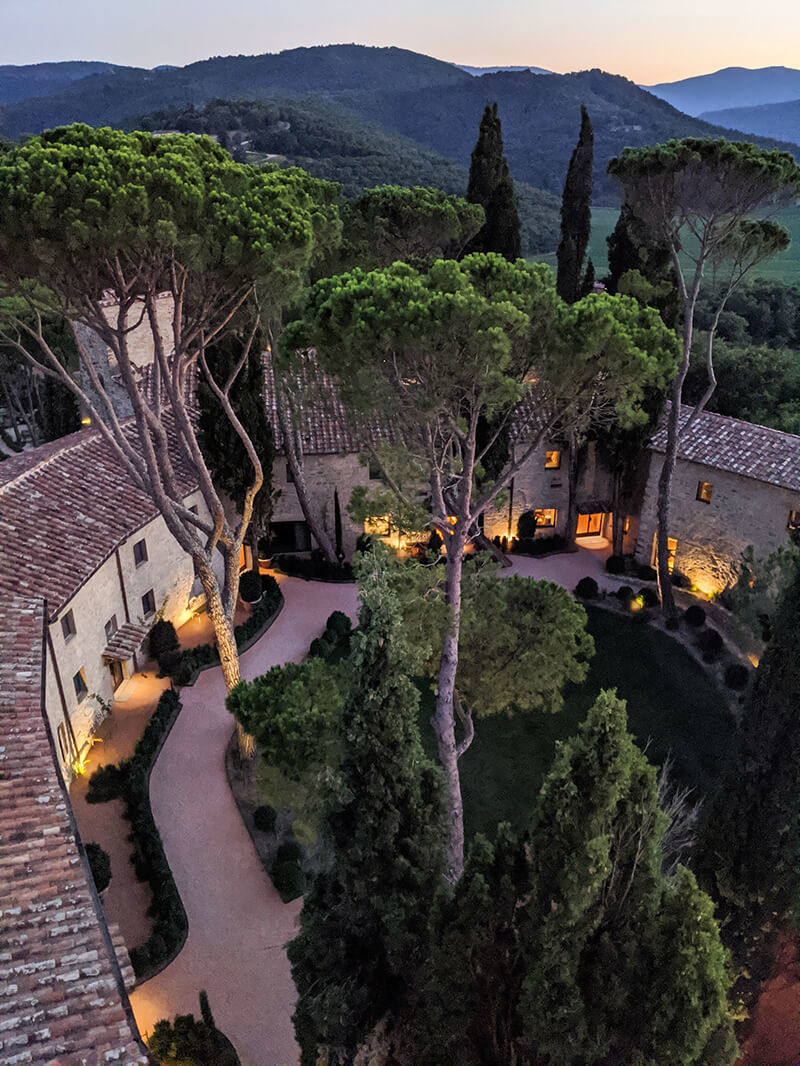 Where better to kick off Wellington, riding or walking boots, leave jackets, coats and hats than a voluminous Boot Room and head off, knowing that when you see this paraphernalia again, it will be so much cleaner 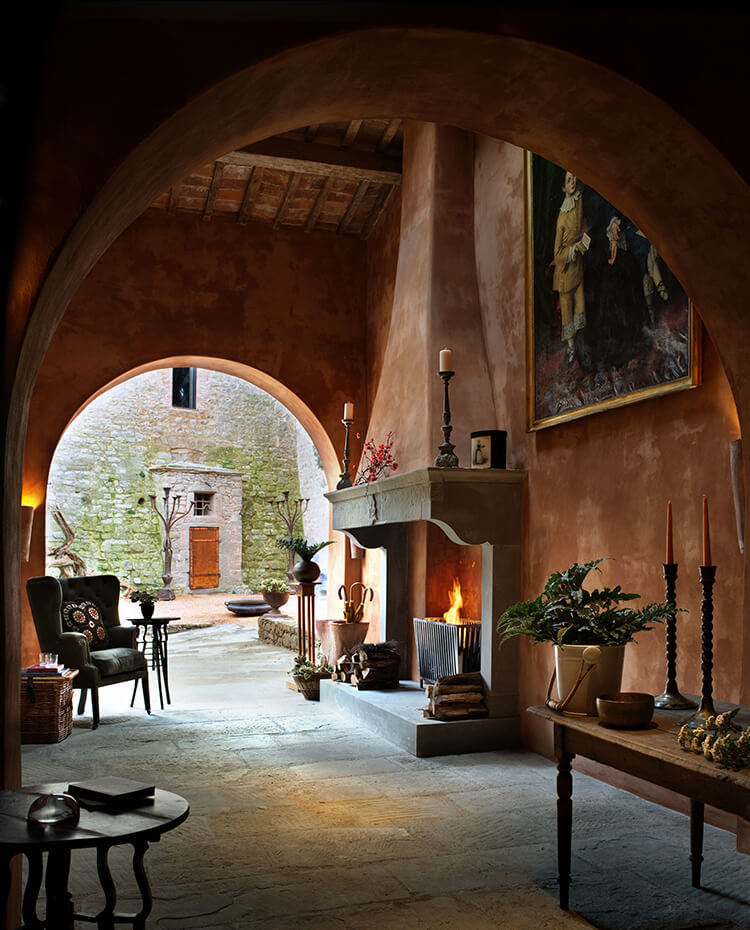 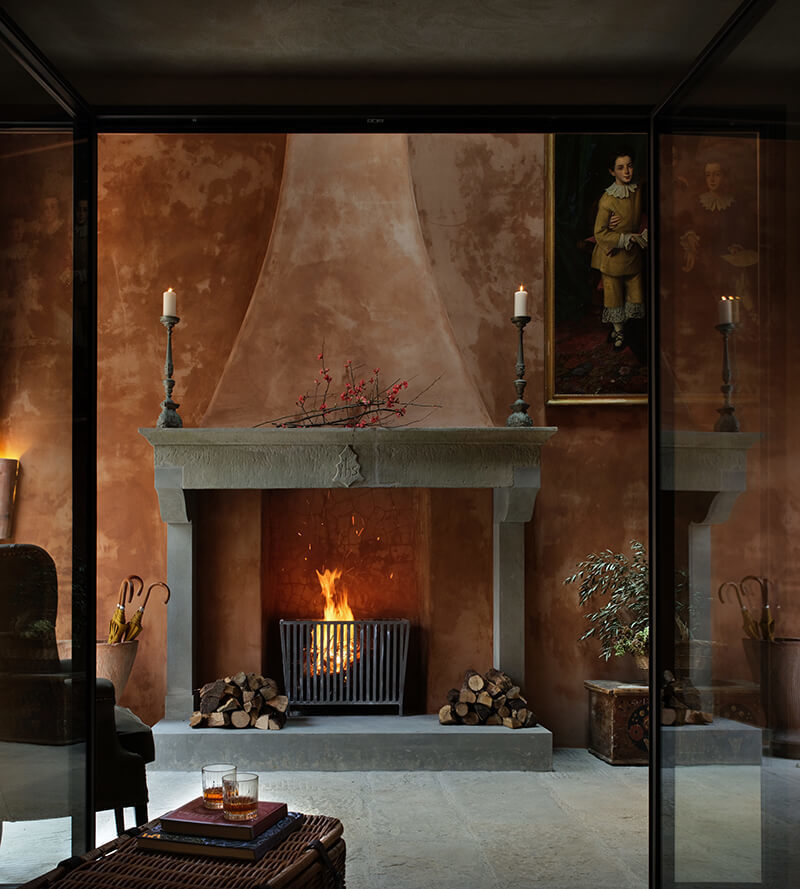 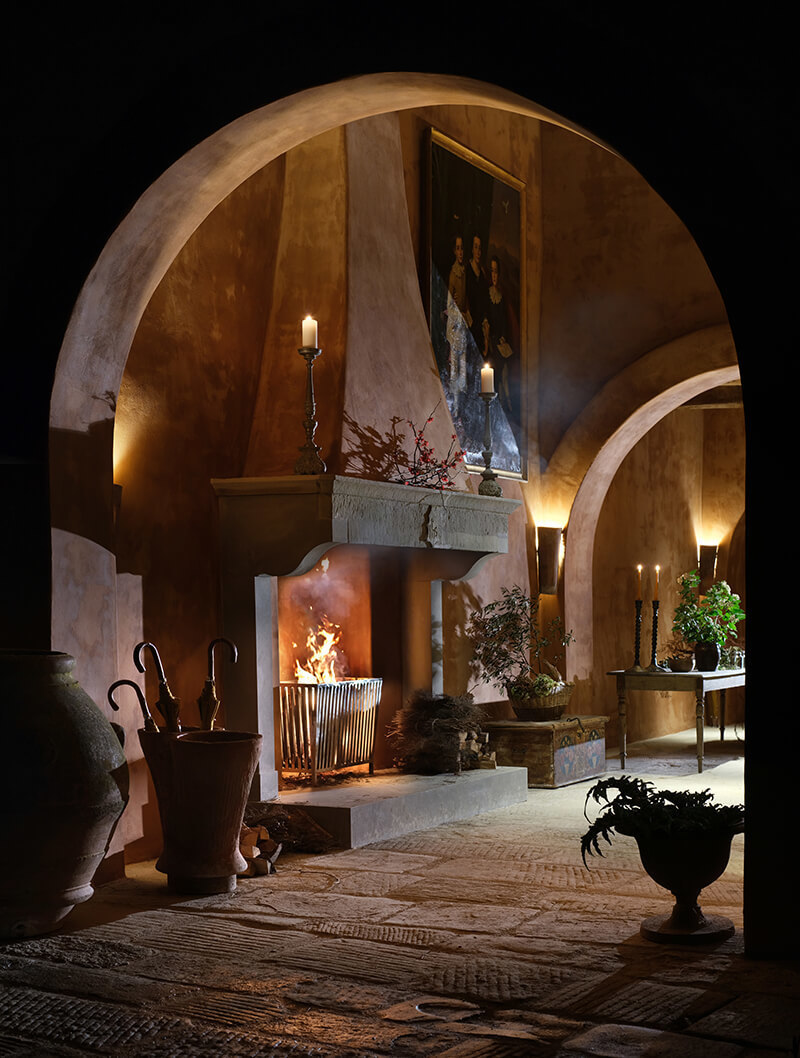 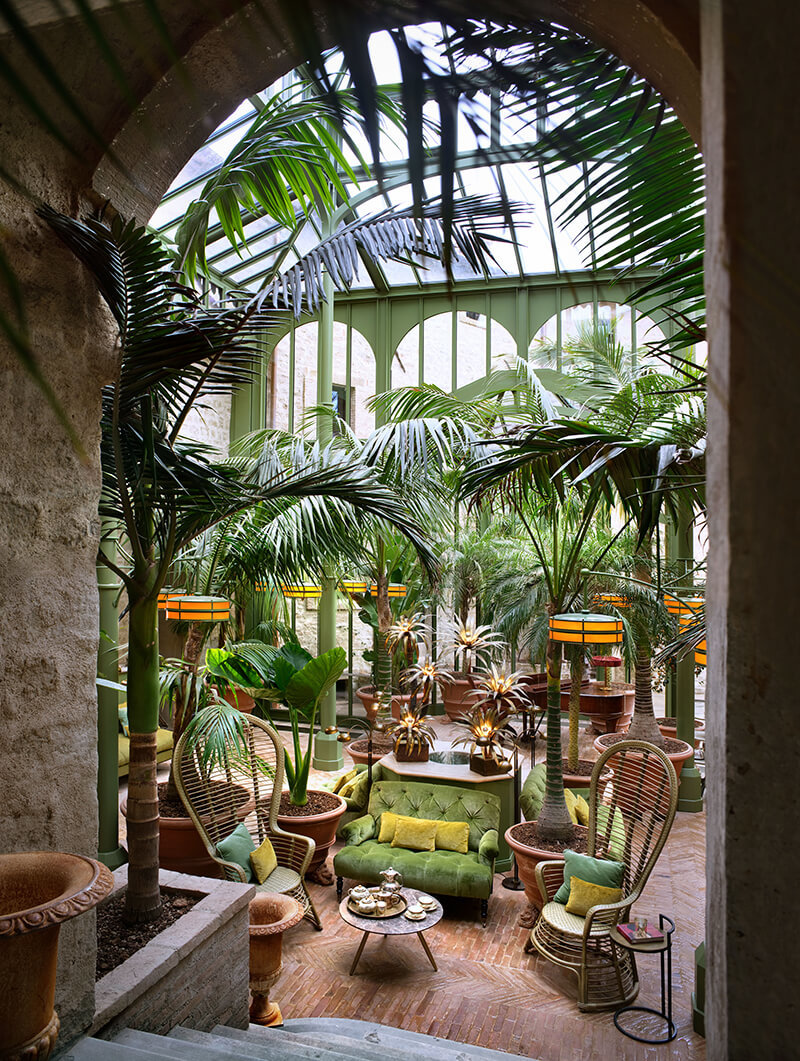 The wrought-iron columns and glass ceiling create an exotic fin-de-siècle space, with an air of Agatha Christie mystery (but without the murder). On arriving at the Castello, it is a perfect first port of call. A place to take in an invigorating negroni, while also absorbing the majesty of the castle’s walls from within. Pluck a book from our library and sit back with another icy glass of something delicious 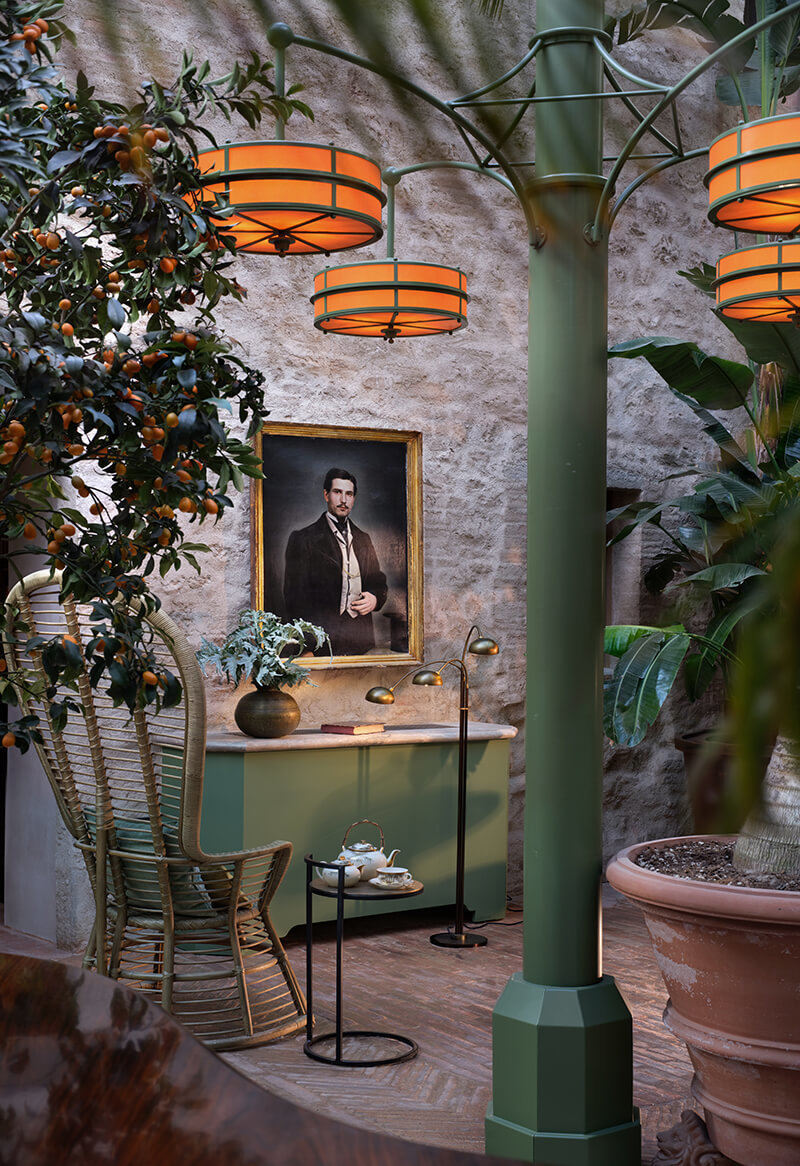 The grand piano is tuned and ready for those that play jazz or classical arias, while portraits of the Conte di Reschio and the Contessa have pride of place to observe the activities of their guests in the heart of the castle.

When the sun sets, the warming glow from within entices you into the magic 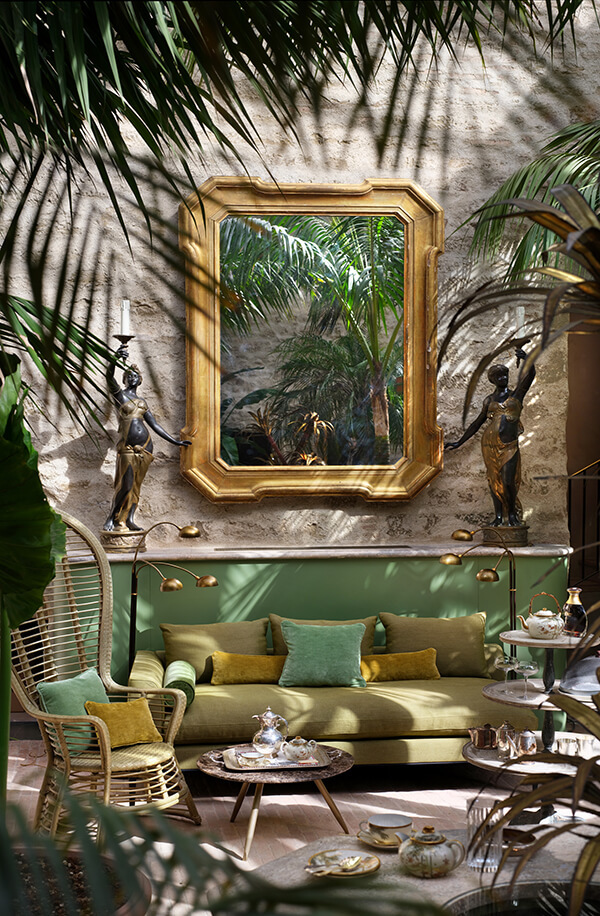 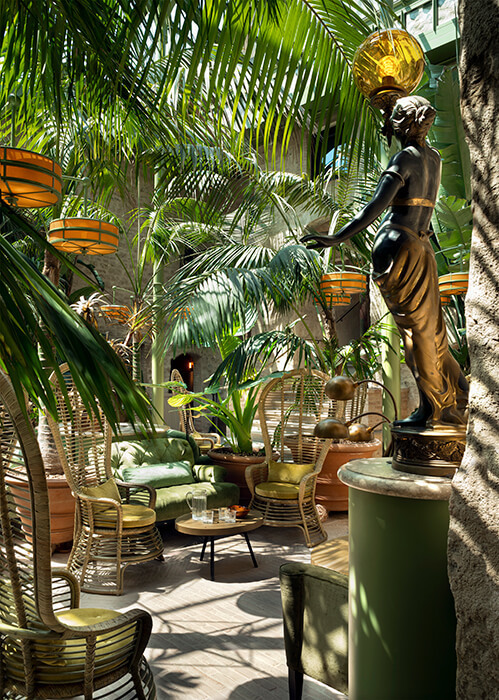 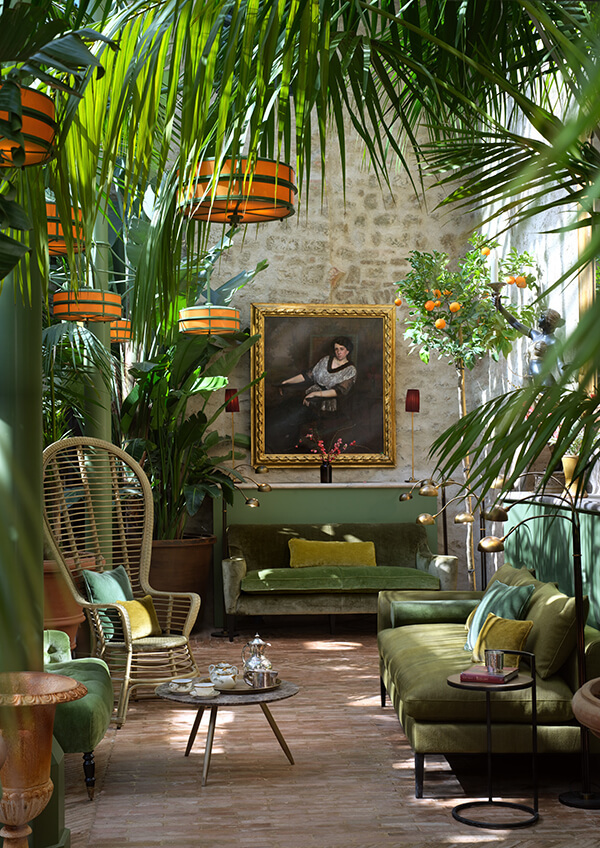 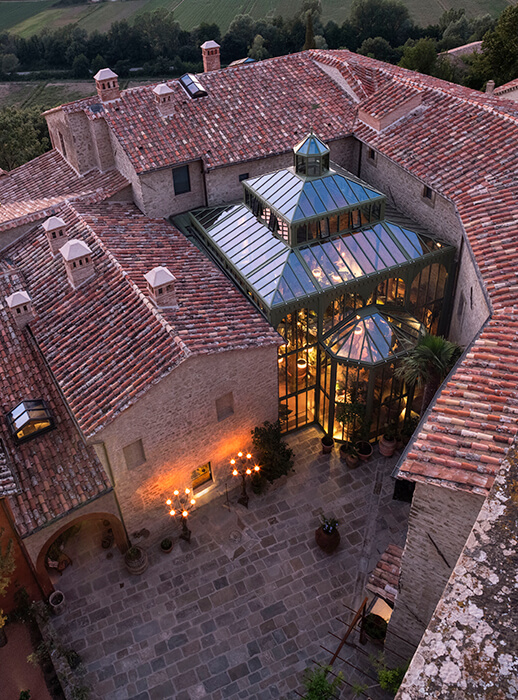 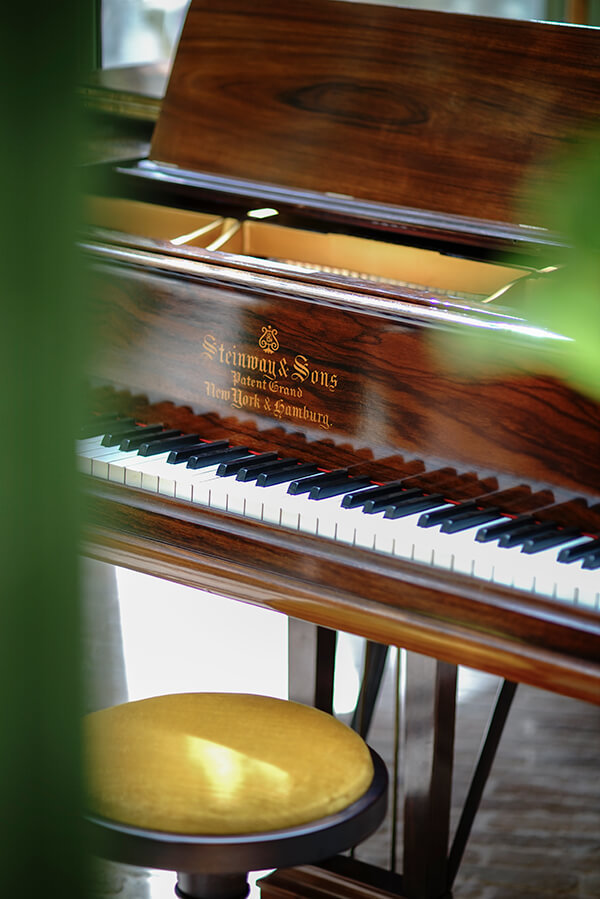 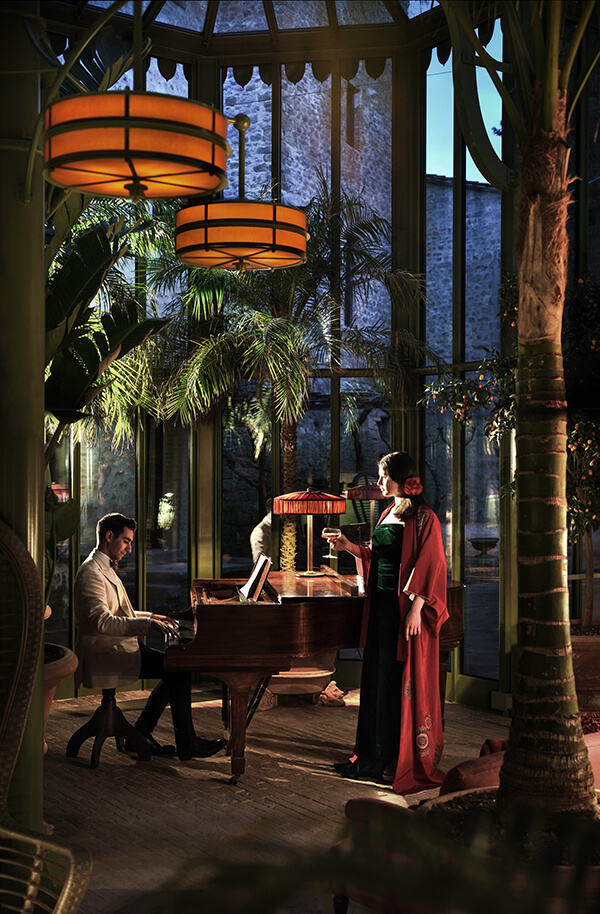 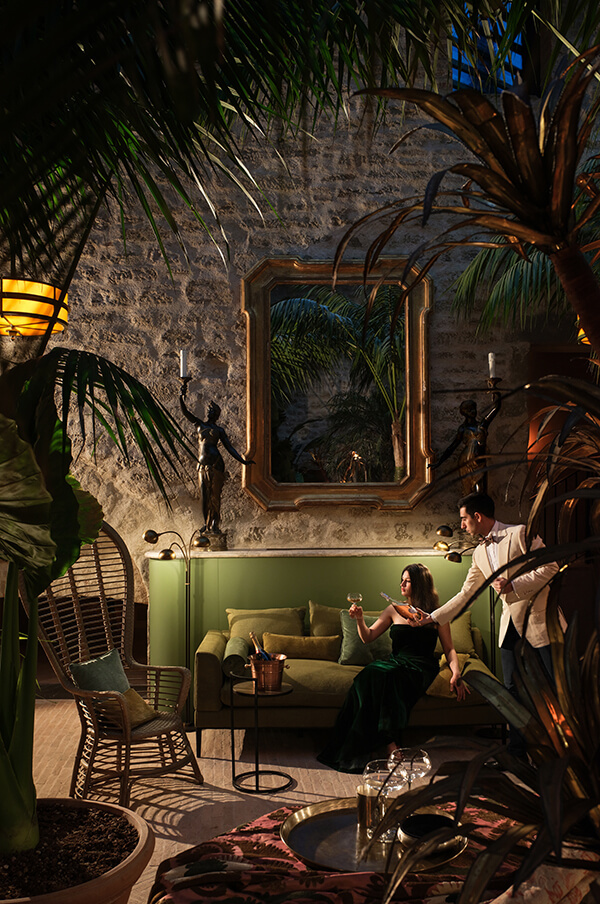 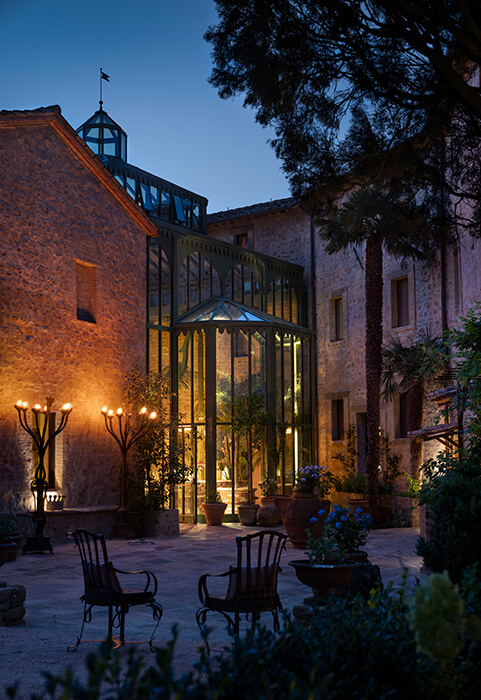 A cool respite from the summer heat or a blazing fire in the winter chill; the Palm Court Bar is a place to relax while luggage is whisked to your Castello suite. It is the hub of the hotel, somewhere to linger over an espresso and plan daily excursions or to sip a cocktail and gossip 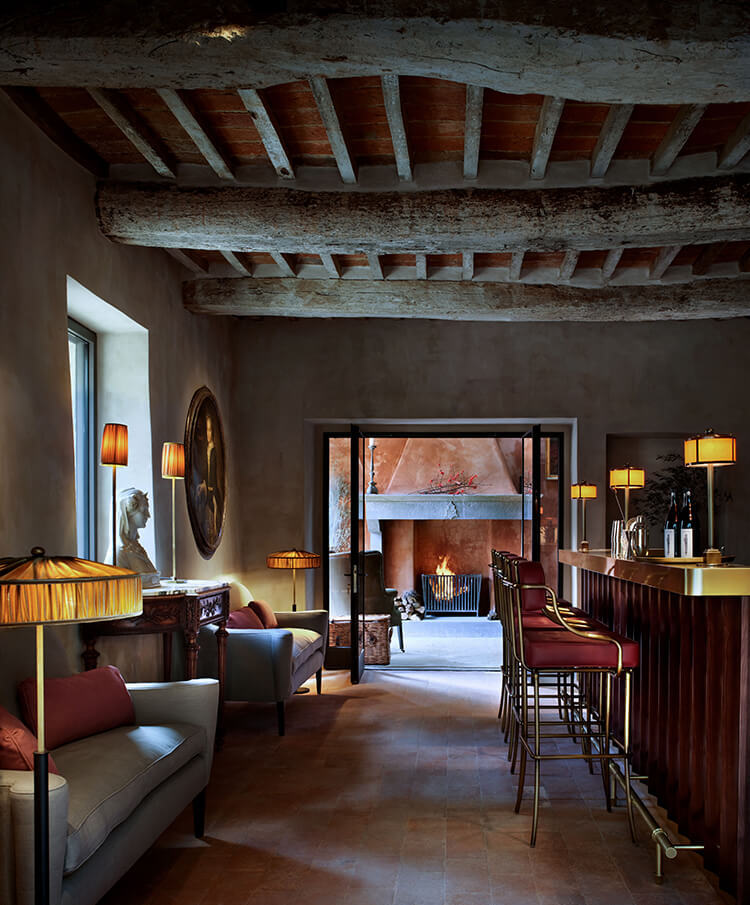 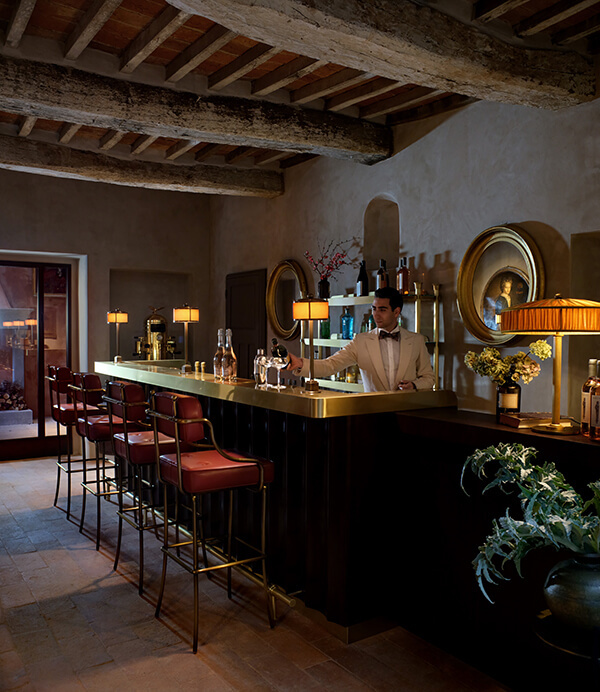 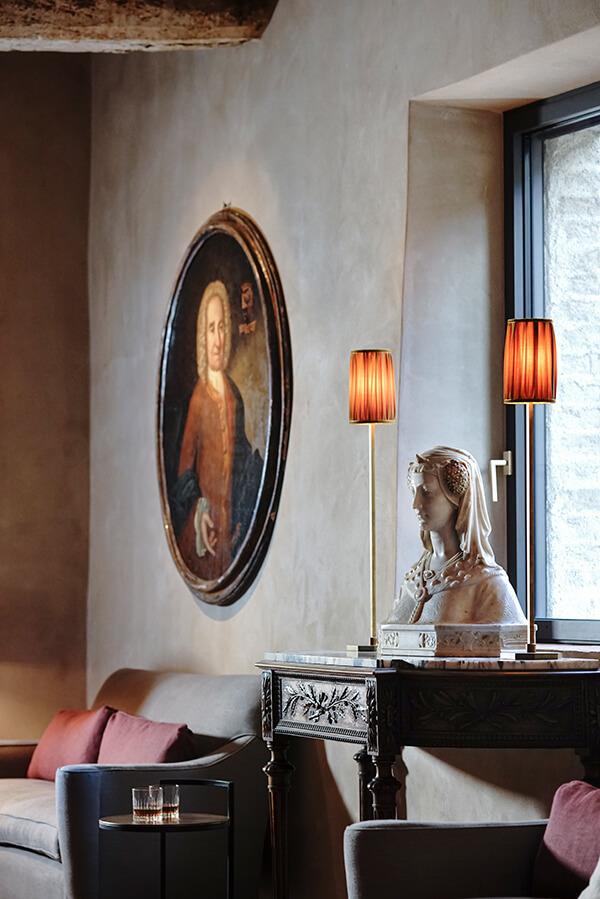 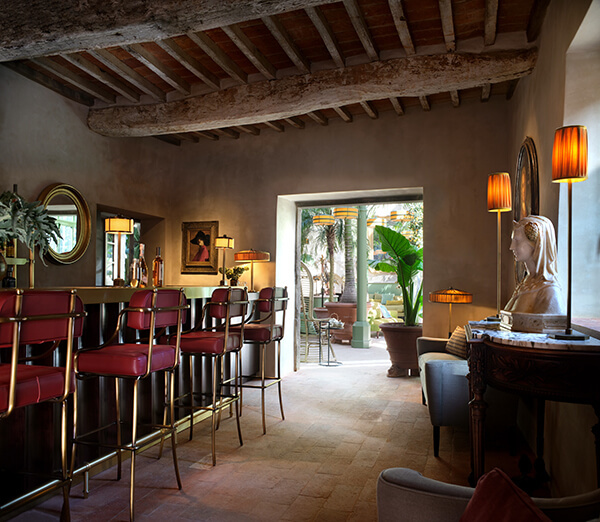 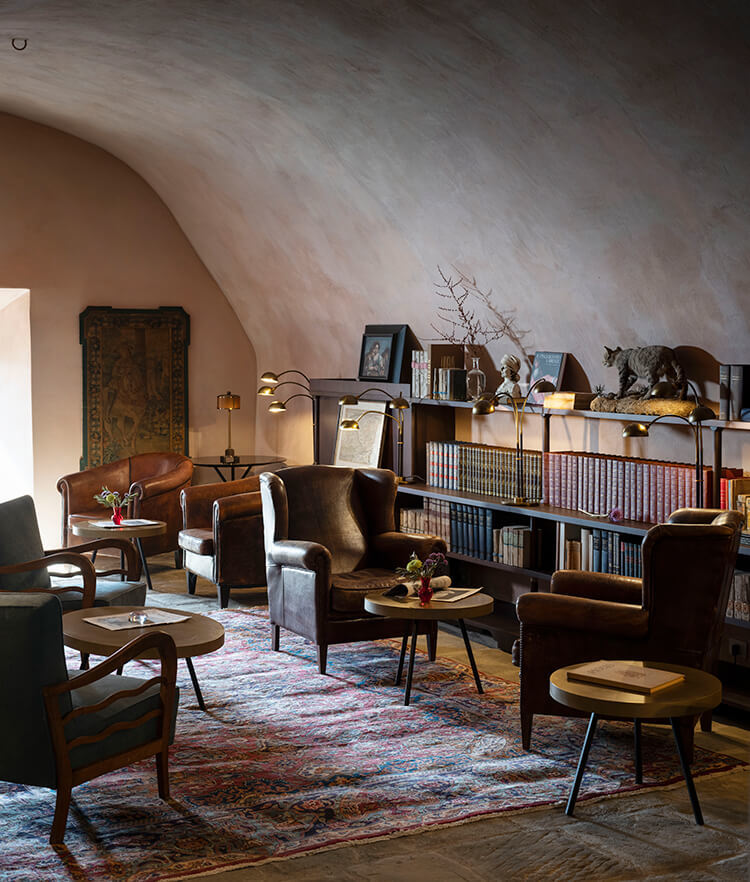 The perfect place to steal away and read a book, or even write one while sitting at the jewellery makers' table. The castle cat, forever stalks the book shelves. Our gamekeeper found and identified that this wild cat (who had its met demise in a road accident) was an extremely rare specimen, he is registered by the authorities as a national treasure 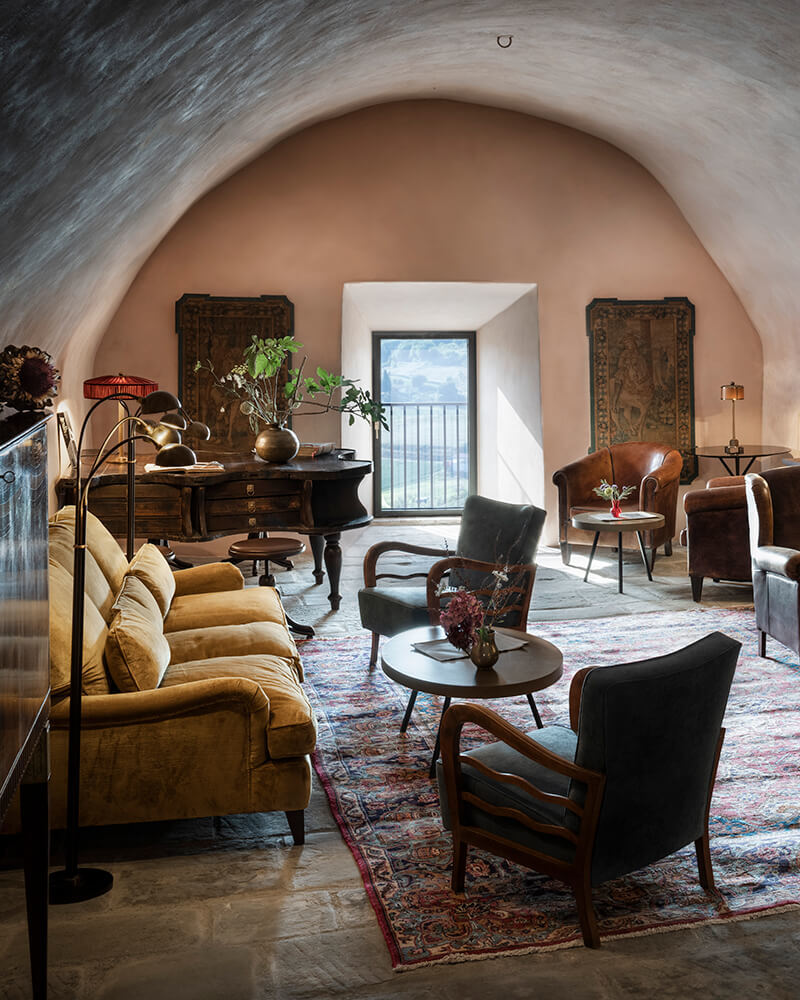 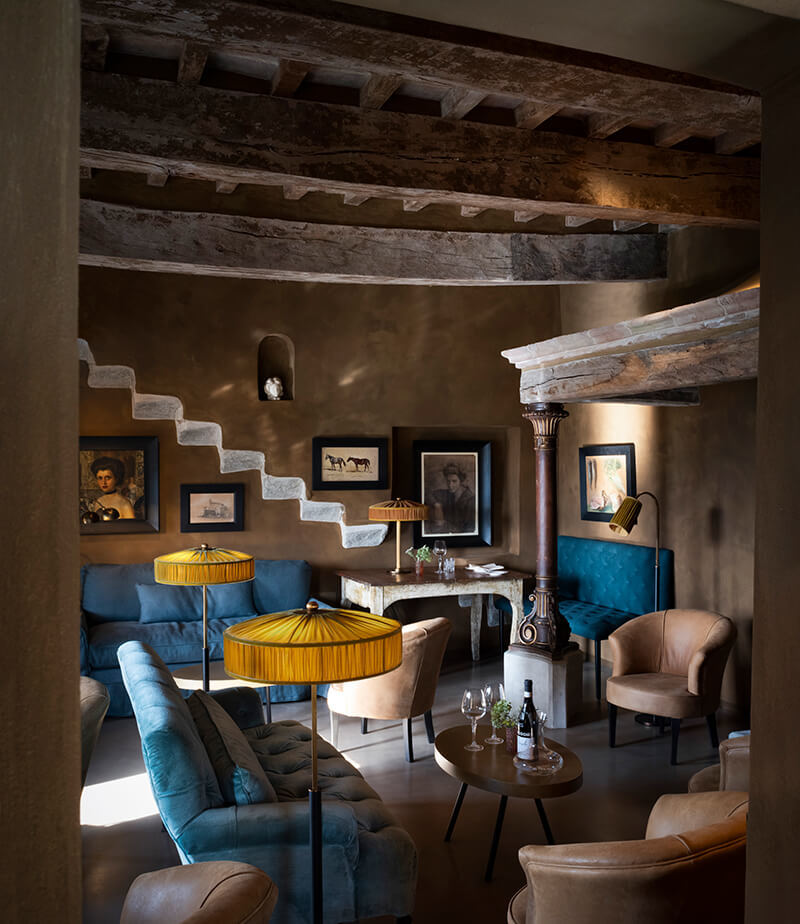 The castle’s former kitchen is now a relaxing place to meet friends for a preprandial drink or even to have a light supper in one of the window seats gazing out at the stunning views. The original hearth is still the focal point, especially when an autumn fire is blazing 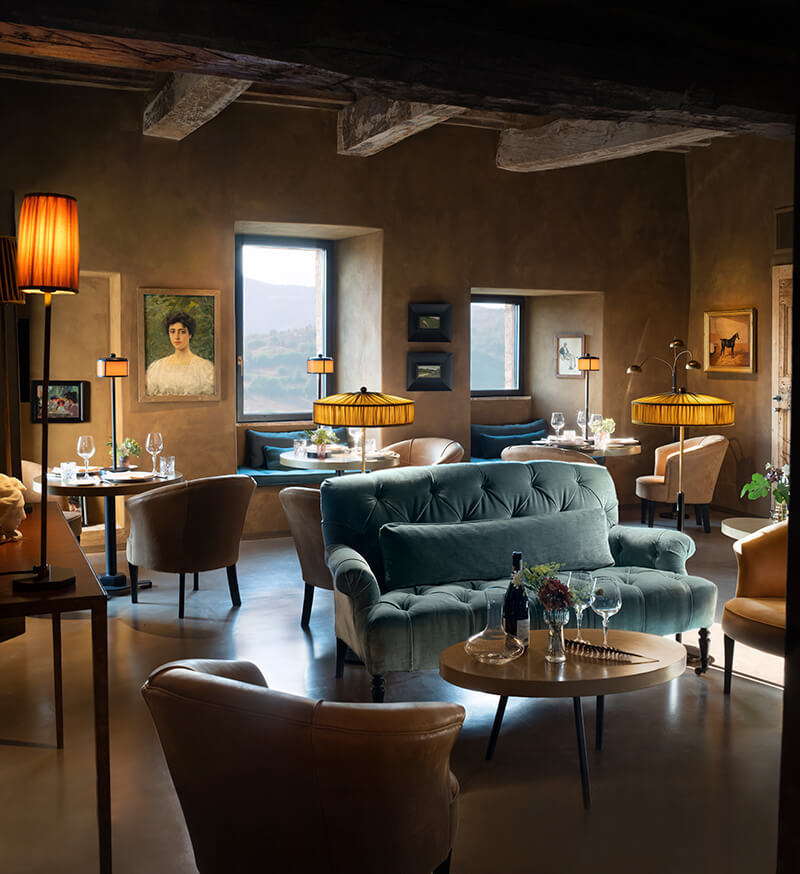 Our outdoor pool is a thing of natural beauty. Settled in the landscape surrounded by mature trees and fragrant gardens, inviting a casual dip. It feels like wild swimming, as you skim over the ripples to the undulating views beyond with paintbrush cypresses, glimmering olive groves and ancient vineyards. The old Torrino has had a renaissance and its attentive staff cater for your every whim 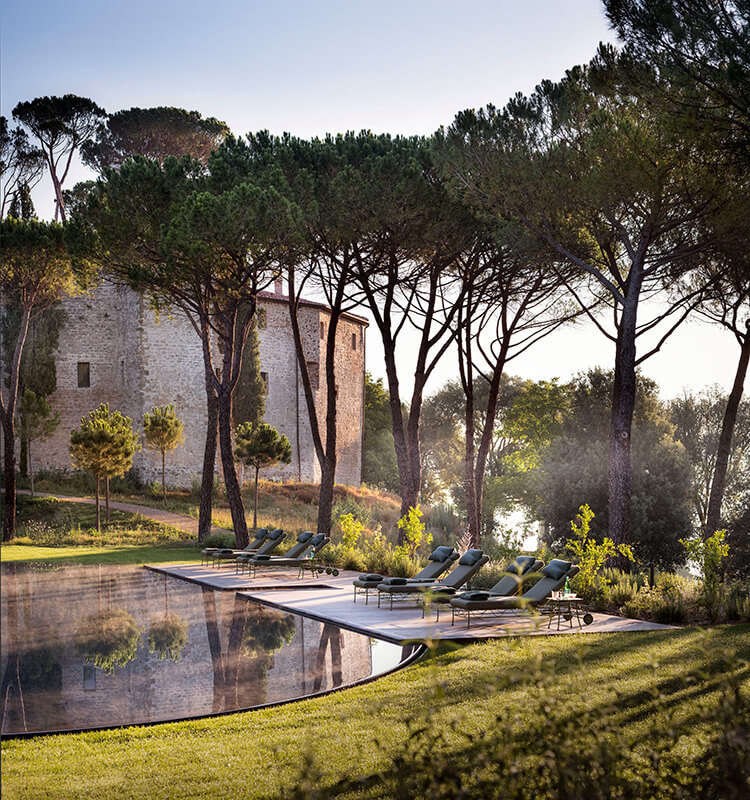 If these walls could talk… they’d probably tell thrilling tales of the 13th-century owner Marques del Monte, or about the Archbishop of Todi, whose coat of arms from 1610 still hangs above the entrance. Or perhaps about Count and Countess Antonio Bolza who arrived in 1984 and planted the seed for the idea of transforming and regenerating the 1,500-hectare estate. Or even the most recent residents, Benedikt and Nencia Bolza, who lived here until recently with their five children, racing around the ruins having a very jolly time (even if the ceilings did occasionally collapse) 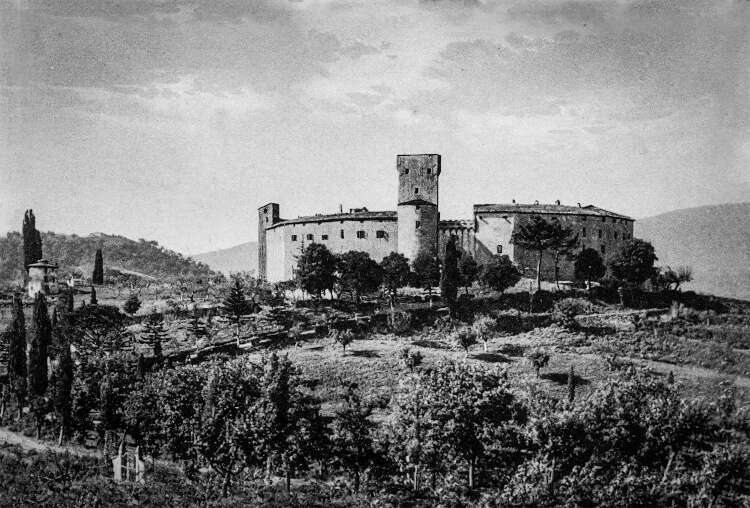 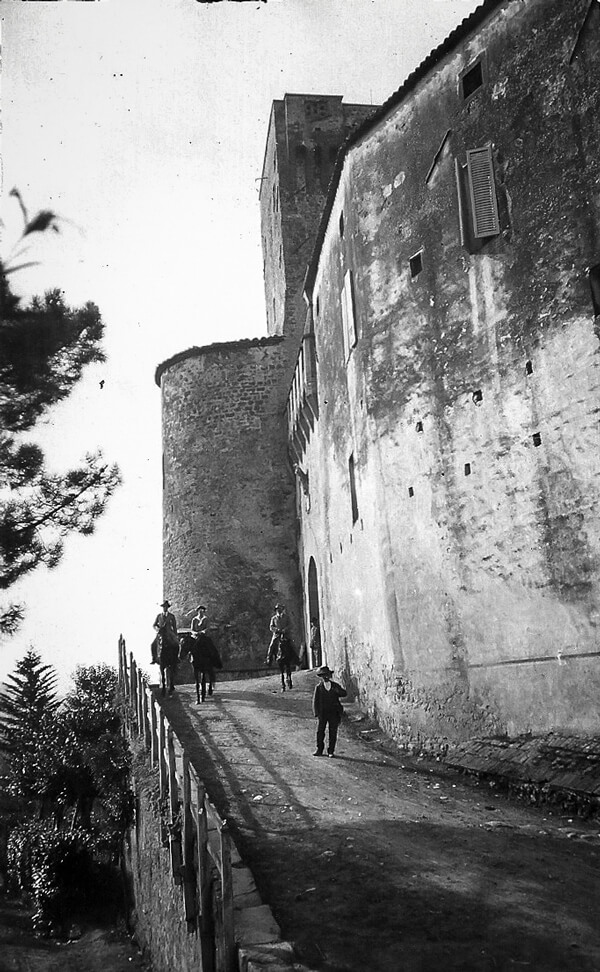 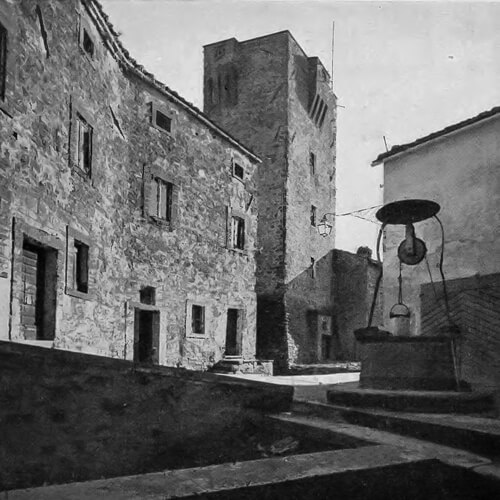 For more on our epic history (a term we don’t use lightly, by the way), head to About us & Reschio history

Meet our long-standing residents, from the smartly turned-out Contessa (she simply has to change three times a day) to the long-suffering Ornella, the chambermaid, who has kept the Castello spick and span for centuries...

The Reschio Negroni comes with a health warning, it is most addictive and could cause marital strife. Should you find yourself in this dilemma, Ruggero, the butler, will surely oblige and find you a dusty attic room for a lonely night. We love having fun and loved re-enacting our favourite Charlie Chaplin clip. After all, we have the most perfect show stopping set in our Palm Court

Some weddings take time, but some innamorati just won’t wait... Domenica and Domenico da Cesi fell so very in love here at Reschio in 1687 that they chose to marry on the spot - even though our chapel of San Michele was looking rather rustic that century. These days, nature’s floristry has been tamed to make room for fellow revellers, and there’s a roof again - but love-struck brides and grooms all still marvel at how the place brims with wild beauty

The long-standing residents of the Castello are taking well to their new companions. La Contessa changes three times a day, so she’s been grateful to room service for helpfully transporting all her laundry - it’s terribly kind of them to insist!

For centuries, Ornella, the chambermaid, has proudly kept the Castello ‘spick and span’. Over the past two years she has been getting rather irritated, with the new arrivals, for leaving dust everywhere... but it could be said that she takes her obsession with cleanliness a little too far, at times….

Ruggero the butler. He is a true innovator! Embracing the new technology that has arrived at Reschio, he can slice bread with the highest precision now. Remembering his days at the Ritz, he exclaims 'Oh! If only Dame Nellie Melba could see how thin I can make her melba toast!

Darkness falls at Reschio. But it isn’t time for bed just yet… Like all the best grandmothers, Nonna Giorgetta knows all the best stories. As you can see, her bedtime stories attract quite an audience... young and old. From tales of enchanted forests and fearless adventurers, the bambini slip off to sleep, their heads full of dreams. But a few always stay to hear how it all ends - for is it true that a wandering knight once saved the Castello from a fearsome dragon - with the help of a clever princess? 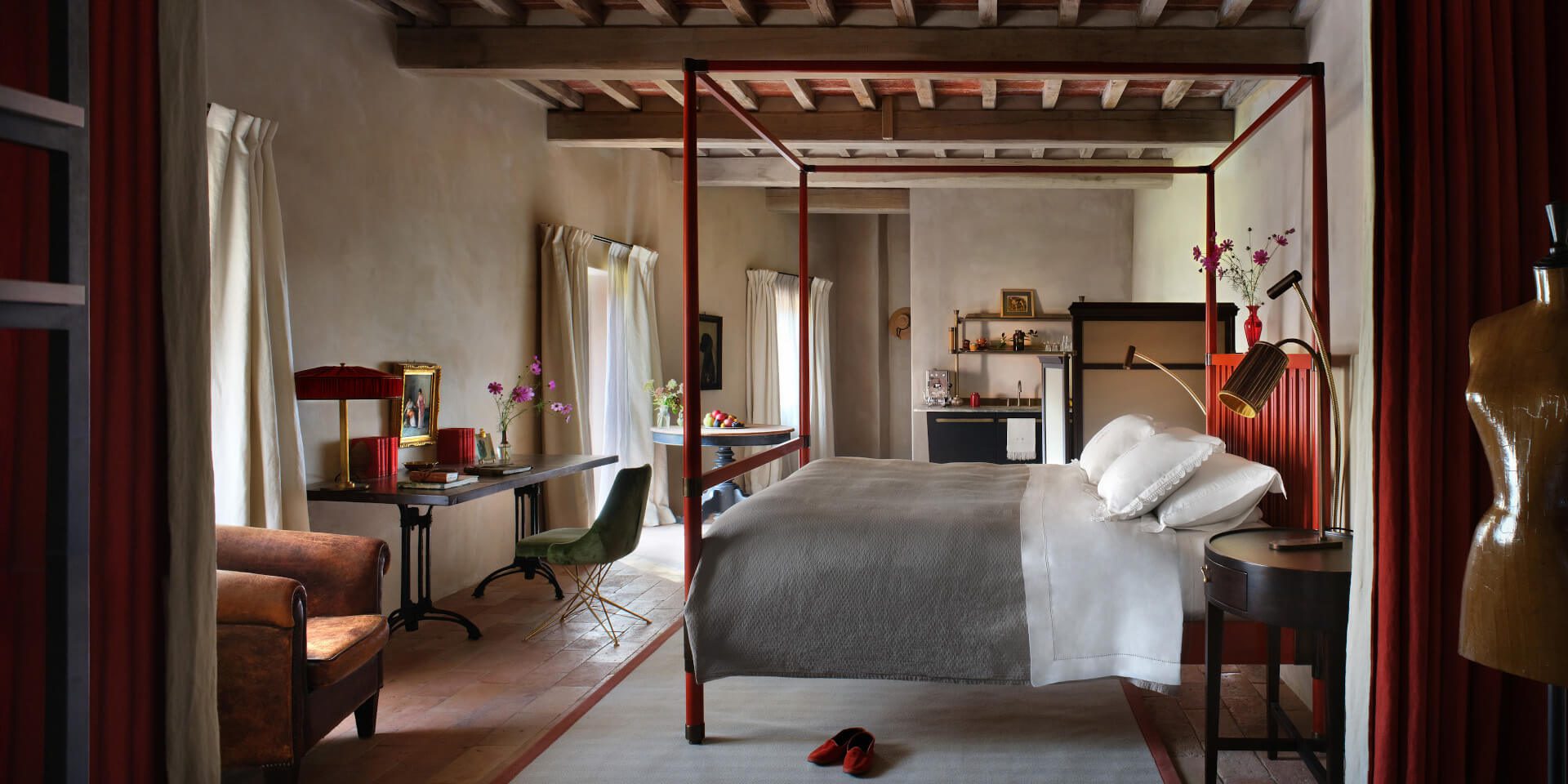 Your opportunity to be in a magnificent hotel, where design, style and comfort are second to none